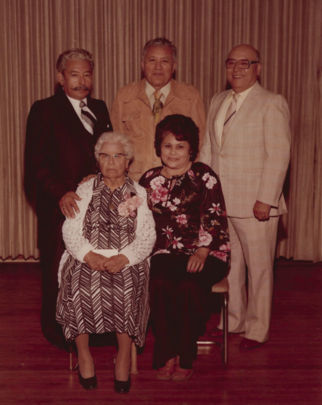 In the early 1930s, Jose Maria Sr. and Engracia Chretin opened a

simple open-air dance hall for the Yuma community to enjoy and socialize. Engracia was well known for her recipes and began to sell food to the dance hall patrons. On February 15,1946, the Chretin’s family officially opened the original restaurant on 15th avenue. The building was constructed of adobe walls and the began with only three tables. The location stood as a landmark in the Yuma community for a historic 61 years.

Jose Maria and Engracia had four children, Raymond, Joe Jr., Victor, and their daughter, Carmen. Their future was destined to be part of the family business. As WWII ended, Raymond and Joe Jr. returned to Yuma from their service in the army to rejoin the family business along with their oldest brother, Victor. Raymond always had his mother’s passion and heart for cooking and later became a Master Chef for Chretin’s. Joe took lead of the business operations as Victor handled the bar and dining room. The business continued

to grow to include their wives and families.

During the 1960s, the family opened multiple locations on 4th Avenue. The continued success of Chretin’s allowed them to construct a permanent location that still houses a restaurant today.

The turn of the century brought many changes, even a time when the restaurant was not in the possession of the Chretin family.

On March 1, 2018, Raymond’s grandson, Robby Rodriguez, regained possession of Chretin’s restaurant. Robby’s dream was
to restore the restaurant in his great-grandfather and grandfather’s honor. Robby’s goal is to bring in the next generation of family and friends to share the tradition of Chretin’s.